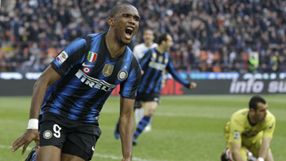 The victory meant second-placed Inter, bidding for a sixth successive title, cut the gap at the top back to five points following leaders' AC Milan's 1-0 win at Juventus on Saturday.

GEAR:Up to £10 off Serie A kits through Kitbag. Free delivery on orders over £50

Third-placed Napoli, beaten last Monday by Milan, suffered a fresh blow when they drew 0-0 at home with second-bottom Brescia to slip eight points behind the leaders with 10 games left.

Rodrigo Palacio gave Genoa a shock lead at the San Siro on 40 minutes but Leonardo's halftime team talk did the trick and Inter came out with all guns blazing, Giampaolo Pazzini and partner Eto'o scoring within a minute of each other.

Eto'o soon made it three with a superb dummy and shot before substitute Goran Pandev boosted his brittle confidence with a tap-in and Japan left back Yuto Nagatomo scored his first Serie A goal to complete the rout.

Mauro Boselli netted late on for the shell-shocked visitors.

"We've made up some ground and now we are in a real battle," Inter coach Leonardo, Milan boss last term, told Sky after becoming the first Serie A coach to record 33 points from his first 13 games in charge.

"There were no magic words at half-time, the team knew we had not shown our potential in the first half. In the second period we needed lots of enthusiasm."

Milan meet Inter on April 3 in what may be a crucial derby.

Giuseppe Sculli netted twice in the first half as fourth-placed Lazio won 2-0 at home to Palermo, still smarting from last weekend's 7-0 home thrashing by Udinese which led to Delio Rossi's sacking and Serse Cosmi being appointed coach.

Udinese, in fifth, are just three behind Napoli after they followed up that masterclass with a more modest 1-0 home win over all-but-doomed bottom side Bari thanks to a penalty from Serie A top scorer Antonio Di Natale.

Adrian Mutu, banished by Fiorentina for weeks for demanding a move before he apologised, started to repay the mid-table Florence side with two goals in a 3-0 win over coach Sinisa Mihajlovic's former team Catania.

Diego Simeone's outfit are slipping dangerously close to the drop zone, which Cesena clambered out of with a 3-2 win at a woeful Sampdoria side who still have not come to terms with the January departures of Pazzini and Antonio Cassano.

Bologna drew 2-2 with Cagliari and Chievo and Parma played out a goalless stalemate.