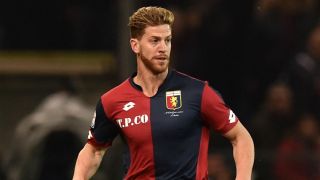 Inter have completed the signing of Genoa defender Cristian Ansaldi, the club have confirmed.

Ansaldi spent last season on loan at Genoa from Russian Premier League side Zenit and the Serie A club activated a release clause to make the move permanent.

However, it was widely expected the Argentina full-back would move on again, and he has already played for Inter in a pre-season friendly against Real Salt Lake.

A short statement on Inter's website confirmed the 29-year-old joins Ever Banega and Caner Erkin in making the switch to Roberto Mancini's side during the close-season.

Inter did not disclose the length of Ansaldi's contract, but Diego Laxalt, who spent last season on loan at Genoa, has moved in the opposite direction.