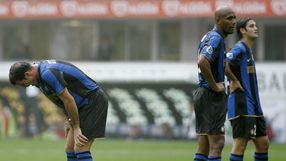 Of the team who lifted the trophy in Madrid in May, only Samuel Eto'o, Wesley Sneijder, Javier Zanetti, Lucio and Goran Pandev are injury-free for a game Inter want to win to secure their passage to the last 16 and ease the pressure on Benitez.

Sunday's 2-1 loss at Chievo left the treble winners sixth in Serie A and media reports said the Spaniard could be sacked just six months into the job if Inter lose at the San Siro on Wednesday and leave qualification hope out of their hands.

Club president Massimo Moratti cautiously backed the coach on Monday despite the 3-1 reverse at Tottenham Hotspur in their last Group A game and two points from the last four Serie A matches, including a derby defeat by AC Milan.

The injuries, which Benitez has denied are because of his training regime compared to ex-boss Jose Mourinho, have offered the coach some excuses for the poor displays but a catalogue of managers shows Moratti's patience does not last long.

"It is a difficult moment, but we must stay calm, and little by little we will come out of it," captain Javier Zanetti told Inter's TV channel.

"To judge this team, you must first of all judge this group when it is complete. It is not an alibi, but it should be stressed. On Wednesday we absolutely must win, carrying on with our heads held high, as always."

It is difficult to underplay the size of Inter's injury list especially when even Pandev and Sneijder do not look totally fit after their own problems and have recently failed to shine.

The chances of last season's top scorer Diego Milito shrugging off his latest muscle pull in time for Wednesday look unlikely while although Esteban Cambiasso played on Sunday, the Argentina midfielder was clearly not ready.

Keeper Julio Cesar was meant to be close to a return before a relapse while full-backs Maicon and Cristian Chivu have thigh and groin strains respectively and are set to miss the game. Coutinho is out for over a month and Walter Samuel the season.

Brazilian midfielder Thiago Motta trained with the squad on Monday to offer some respite having featured only once this term after knee surgery but youth team players will again almost certainly have to be called on to the bench.

Inter are second in the group on seven points like leaders Tottenham while Twente, who drew 2-2 at home with the holders in September, are on five points in third with two games left as they plot a surprise progression to the last 16.

The Dutch champions are second in their domestic league after 15 games but lost 2-1 at home to AZ Alkmaar on Saturday.