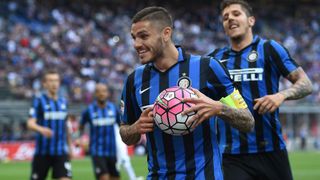 Inter sporting director Piero Ausilio has denied that Mauro Icardi is up for sale.

On Sunday, Icardi's wife and agent Wanda Nara claimed Inter had put the captain up for sale amid reported interest from Atletico Madrid.

The 23-year-old Argentinian signed a new four-year contract at San Siro in June 2015, and Ausilio insisted there are no plans to let him leave beforehand.

Asked about Nara's comments, Ausilio said: "I'm not angry about it, I just would have preferred to spend my Sunday differently.

"It made me smile to be honest, but I do think it was the wrong time and the wrong place. You always have the opportunity to discuss these things but I feel it was done the wrong way. It should be done in private.

"In any case, one day of headlines is enough; let's talk about things that matter. Icardi signed a new contract a year ago, we've made him our captain and he's not for sale. Anything else is just talk."

Ausilio revealed Inter have an interest in Portugal and Sporting CP midfielder Joao Mario, though he does not feel Gabriel Jesus admitting he would like to play for the Serie A club last week hands them the upper hand in the race for his signature.

The sporting director also confirmed their interest in Sassuolo's Domenico Berardi had ceased, while there has been no movement on the potential signing of Antonio Candreva.

"Joao Mario is a good player but he's very expensive. We're tracking him but we're looking at other players too," Ausilio said.

"As for Gabriel Jesus, we can't say we hold an advantage because the situation is in the hands of his club and the player himself.

"About 10 of the world's biggest clubs are after him and we're one of them. The competition for his signature is fierce.

"We just need to make a couple of additions and we know exactly which areas we're looking at. We're not in any rush because the transfer window has only just opened.

"We met with Sassuolo to inquire over Domenico Berardi's availability, plus a few other players. The response was negative and the conversation finished there.

"We haven't put an offer on the table for Antonio Candreva. His technical ability is not in question but you have to take other things into consideration."

Ausilio refuted reports linking centre-back Jeison Murillo with a move away from San Siro, but admitted talks with Roma regarding the transfer of Juan Jesus are ongoing.

"There have never been talks over Jeison Murillo, but there's been contact with Roma over Juan Jesus," he said.

"That doesn't mean anything has been done, however. We're still talking, let's wait and see."