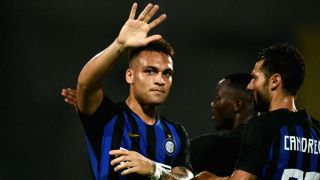 Antonio Candreva gave the Serie A side the lead after 16 minutes with a gorgeous 30-yard strike which found the top-right corner, though it did not last long.

Christian Noboa levelled just before the half-hour mark, lashing a fine volley into the bottom-left corner from just inside the penalty area.

Inter went back in front early in the second half – Mauro Icardi coolly converting a penalty after Miha Mevlja tripped Borja Valero.

But Zenit were far from done, equalising through Robert Mak's ferocious effort just after the hour, then going ahead thanks to Hernani, whose stunning long-range strike went in off the crossbar.