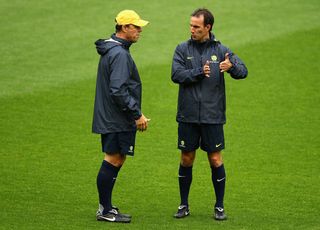 The Socceroos have suffered consecutive 6-0 losses – at the hands of Brazil and France – leading to the sacking of coach Holger Osieck.

The German saw his contract terminated just hours after the loss in Paris with assistant Aurelio Vidmar taking over for the Canada clash.

It was another listless display by Australia against France, particularly defensively as they were exposed on several occasions.

Vidmar may at least encourage some fight and spirit from the Socceroos, which has been lacking in the past two losses.

He has been dealt a blow with Tommy Oar (back) returning to Eredivisie club Utrecht after failing a fitness test in the lead-up to the France match.

Right-back Luke Wilkshire has been sent back to Dinamo Moscow to manage his long-standing injury.

Those losses add to existing injuries to Mark Milligan, Tom Rogic and Brett Holman, who were selected in the squad but are unavailable.

Club Brugge goalkeeper Mat Ryan is likely to start in goals after Mitch Langerak was given his opportunity – and did quite well despite conceding six – against France.

Jason Davidson, Rhys Williams, Dario Vidosic and Mathew Leckie should also play a part as Australia look for their next generation.

The Socceroos' confidence has taken a battering in the past month and a clean sheet against a struggling Canada would help.

Vidmar's side should also be able to control possession better than they have against Brazil and France.

Canada have failed to win in 2013, without a victory in their past 11 matches and without an international goal in 662 minutes.

Spanish former Real Madrid coach Benito Floro took over in charge of Canada in August and he will rely on DC United forward Dwayne De Rosario to help his side break their goal drought.

Even an Australia side short on confidence should be too strong for struggling Canada at Craven Cottage.