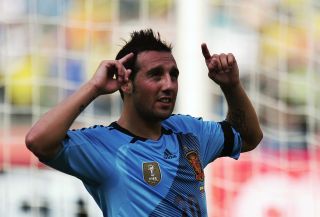 The world and European champions dealt with the altitude in Guayaquil well as Vicente del Bosque's side produced a professional win despite the absence of several of their stars.

Negredo's flick in the 25th minute set Spain on their way before Cazorla, who made the most of a rare start, sealed the triumph in the second half.

None of Xavi, Juan Mata, Fernando Torres or Gerard Pique were involved in South America for Spain, but Del Bosque did give new Manchester City signing Negredo a chance to lead the line up front.

Ecuador picked a strong side that relied heavily on the attacking instincts of Felipe Caicedo and Joao Rojas, but they were quickly on the back foot.

Spain were inches away from scoring after just three minutes as they carved open the Ecuador defence with a trademark passing move.

Silva was the unlucky player, beating Ecuador goalkeeper Maximo Banguera with a scuffed left-foot effort, only to see it hit the woodwork and bounce away to safety.

Negredo volleyed over shortly after, before players and fans stopped during the 11th minute to pay their respects to Christian Benitez, who wore the same number for Ecuador.

The striker died last month of heart failure, aged just 27, and his memory was warmly applauded while the capacity crowd sung his nickname – 'Chucho' – loudly.

Caicedo and Rojas combined well on more than one occasion for Colombia but they lacked the cutting edge to threaten Spain.

Andres Iniesta hit the post in the 22nd minute with a 20-yard effort from distance and it was a warning sign Colombia did not heed.

Just three minutes later – after Caicedo wasted a free header - and Negredo put them into the lead, producing an outrageous backheel flick after sublime build-up work from Cazorla.

Cazorla initially saw his 20-yard effort sting the palms of Banguera, before scurrying to the loose ball and cutting back across the face of goal.

And Negredo got to the ball at the near post first, flicking into the back of the net to give Spain the early advantage.

At the other end, Gabriel Achilier nodded a free-kick wide while Segundo Castillo forced a good save from Iker Casillas from 20 yards, but Spain were well worth their half-time lead.

Del Bosque removed Negredo, Iniesta and Silva at the break, with Thiago Alcantara, Jesus Navas and Fernando Llorente introduced in their place.

Casillas also left the pitch early in the second half, replaced by Victor Valdes, as Cristian Tello curled an effort wide in the first meaningful action of the second half.

Colombia slowly worked themselves into the match and they should have equalised in the 61st minute, only for Enner Valencia to head onto the crossbar.

After Caicedo burst down the channel and created space, he turned and pulled back for substitute Christian Noboa, who saw his excellent cross find Valencia.

But although Valdes was beaten, the woodwork was not, and Spain delivered the ultimate sucker-punch one minute later.

Cazorla was the scorer, benefiting from Tello's neat flick before running into the penalty area and driving a right-footed finish past Banguera.

Colombia had a few half-chances to pull a goal back but lacked quality in the final third, while Llorente nodded wide from a Navas cross when he should have done better.

Spain deserved victory, though, with a disciplined and organised performance sure to please manager Del Bosque.

For Ecuador, the result was far from ideal, with crucial 2014 FIFA World Cup qualifiers ahead against Colombia and Bolivia next month.