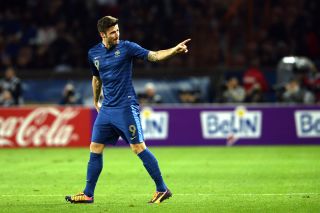 Didier Deschamps' men meet Finland in their last Group I qualifier on Tuesday, and they should head into that game with a great deal of confidence after producing an excellent performance.

Arsenal striker Giroud was at the heart of a fine display, scoring twice in the first half after Bayern Munich star Franck Ribery had opened the scoring with a penalty.

Newcastle striker Loic Remy made his first appearance for France since March as he was named in the starting XI, while Australia's side featured six changes from their 6-0 defeat to Brazil last month.

France almost took the lead inside four minutes as Mitchell Langerak produced a fine save to deny Giroud from close range.

However, just four minutes later they did find opening goal when Ribery slotted home from the spot after David Carney had handled in the area.

The hosts continued to dictate in the early stages, and they soon doubled their advantage, Giroud latching on to Ribery's pull back before lifting a sublime finish over Langerak and into the bottom corner.

Australia offered little as an attacking force in the opening half, and they conceded their third after just 27 minutes as Giroud tapped in at the end of a sublime move between Ribery and Samir Nasri.

France continued to surge forward and duly added a fourth on the half-hour mark through Cabaye, who lashed a powerful finish into the bottom corner from the edge of the area after meeting Ribery's lay-off.

Raphael Varane and Cabaye went close before the break, but Australia did not heed those warnings as Debuchy capitalised on poor defensive work from Australia to make it 5-0 after 47 minutes with a brilliant left-footed volley.

France refused to relent and dished out further punishment shortly after, substitute Benzema turning home Ribery's left-wing cross to score his first goal for the national team since June 2012.

Tim Cahill created Australia's only chance as he curled over from distance, while Remy, Nasri and substitute Moussa Sissoko all went close at the other end, but it mattered not as France coasted to an easy win.