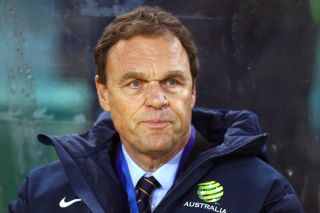 Coming into the friendly on the back of a 6-0 thrashing at the hands of Brazil in September, the German is under pressure despite having helped Australia qualify for next year's World Cup.

The huge defeat, as well as the Socceroos' failure at the East Asian Cup and inability to regenerate an ageing squad, have Osieck in the firing line.

Reports have suggested Football Federation Australia have even sounded out potential replacements for Osieck.

Another loss like the one to Brazil could signal the end for Osieck, who needs a decent performance from his team even if they are unsuccessful at Parc des Princes.

The Socceroos may be coming up against one of the world's best teams for the second outing in a row but they must avoid embarrassment.

Tommy Oar and David Carney have claimed Australia have been working on keeping their shape and maintaining possession during training.

It was those basics which cost the Socceroos against Brazil and they will be punished should they fail in those areas again.

Brett Holman (quadriceps) and Tom Rogic (groin) have been withdrawn from the squad due to injury.

Osieck may decide to give opportunities to fresher faces against France or when his side face Canada in London on Tuesday.

Veteran goalkeeper Mark Schwarzer has been left out of the squad and that opens up a position for either Mat Ryan (Club Brugge) or Mitch Langerak (Borussia Dortmund).

France coach Didier Deschamps has named a strong squad but could have an eye on his team's World Cup qualifier against Finland on Tuesday.

The matches should provide striker Karim Benzema with yet another chance to break his international goal drought.

The Real Madrid striker last scored for his country in June last year and could finally be back on the scoresheet playing in front of the likes of Franck Ribery and Samir Nasri.

France are unlikely to finish top of their group in qualifying and can finish no lower than second – probably behind reigning world champions Spain.

Several of Deschamps' players are likely to be given the chance to show what they are capable of against a struggling Australia outfit.