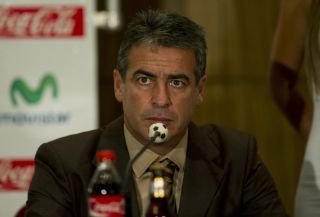 Qatar had drawn three consecutive matches heading into the clash at the Abdullah bin Khalifa Stadium, but Peru - ranked 52nd in the world - represented a step up in quality.

The hosts held their own until the 84th minute when Alexander Callens headed home from close range.

Paolo Guerrero then capped a lively performance for Pablo Bengoechea's men by making sure of the win in the closing stages, as Peru racked up a third straight victory.

There was little in terms of goalmouth action until Luiz Ceara shot narrowly wide of goal shortly after the half-hour mark for the hosts.

Qatar came even closer to taking the lead seven minutes after the restart, Abdulrahman Issa hitting the crossbar with a header from a free-kick from the left before Abdulaziz Hatem forced a fine stop from George Forsyth with the follow up.

Peru had chances of their own, however, Guerrero racing through one-on-one just after the hour only to be thwarted by a strong one-handed save from Qasem Burhan.

The match appeared to be heading for a draw until Callens intervened. Burhan could only parry Guerrero's thumping back-post header and Callens was on hand to nod home the follow up.

Guerrero then made sure of the win two minutes from time with a well-placed left-footed shot from the edge of the area.