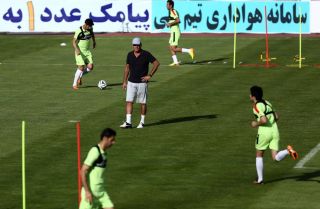 The Portuguese will lead Iran into their first World Cup since 2006 when they take on Nigeria in Group F on June 16.

If they have been unconvincing in their on-pitch build-up, their off-field goings-on have been chaotic with assistant coach Majid Salih leaving his post following their training camp in Austria.

Goalless draws with Belarus and Montenegro have done little to foster optimism among Iran fans of springing an upset in Brazil.

However, the former Portugal and South Africa coach claims they are in good shape going into their opener against Nigeria.

Following that clash, billed by Queiroz as a "final", Iran face Argentina and Bosnia-Herzegovina, with their coach stating Saturday's friendly will provide a welcome test.

"It was a good camp and our players showed their commitment. I believe that the Iranian fans have to be proud of their players," he told the Tasnim News Agency.

Iran's World Cup campaign could be Quieroz's final stint in charge of the national side with a renewal of his contract yet to be agreed.

However, he recently declined to comment on his own personal circumstances - instead preferring to keep the focus on his side's preparations.

"I think it's not time to talk about that," he added.

"In the past 10 months, nobody talked to me about my contract extension. It's not time for hypocritical behaviour and we have to focus on our preparation."

Trinidad and Tobago will likely have to produce something extra special to deny Iran a first victory of their World Cup preparations.

They have not played a competitive game since the Gold Cup defeat to Mexico in June last year and were beaten 3-0 by Argentina on Wednesday.

If Iran too can rack up a few goals against the Caribbean nation, as group rivals Argentina did in midweek, it would set them up nicely for their opener against Nigeria.

With Queiroz's men likely to battle with Nigeria and Bosnia-Herzegovina for second place in Group F - a solid start in Brazil could prove vital in their progression.