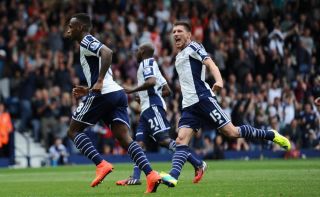 Irvine took charge of West Brom for the first time in the top flight since being named head coach in June, but his side made a poor start at The Hawthorns as Lee Cattermole hit an unstoppable 25-yard drive that flew into the top corner.

The hosts equalised shortly before half-time when referee Neil Swarbrick awarded a controversial penalty for a tug on Victor Anichebe from Valentin Roberge and Berahino confidently dispatched the spot-kick.

Berahino then put the hosts ahead from close-range after a fine lofted cross from debutant Craig Gardner, but Sebastian Larsson rescued a point for Sunderland late on with a finish from close range.

"He has a love for the game, works really, really hard in training and has a great future ahead of him."

Irvine, however, lamented West Brom's inability to see out the victory and make a winning start to the campaign.

"Overall I'm disappointed because we let in a late goal and I thought we'd see it out," he added.

"I was also disappointed with how it was conceded.

"[But] the supporters were fantastic. I loved it when they made lots of noise. They were fabulous."