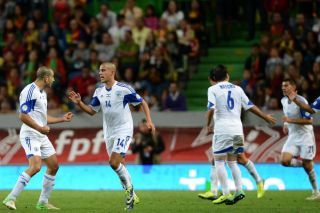 The match was originally due to be played in Jerusalem's Teddy Stadium, but the unrest in Israel has forced UEFA's decision.

Israeli clubs competing in UEFA competitions have been forced to play home fixtures on neutral ground, thus far all affected fixtures have been played in Cyprus though no decision has been made for the national team as of yet.

A UEFA statement read: "The UEFA Euro 2016 qualifying game between Israel and Belgium, which was scheduled for 9 September 2014, has been postponed to 31 March 2015.

"This follows an agreement between the two concerned national associations. The kick-off time and venue will be confirmed at a later stage.

"The decision made by the UEFA Emergency Panel on 16 July, namely that no UEFA competition matches may be played in Israel until further notice due to the current security situation, remains in place."