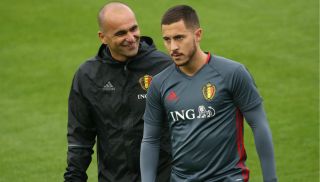 Belgium manager Roberto Martinez believes this transfer window could be the right time for Eden Hazard to leave Chelsea.

Hazard captained the Red Devils to their best finish at a World Cup as they took third place, contributing two goals and three assists.

There has been persistent speculation that Hazard could fill the void left by Cristiano Ronaldo at Real Madrid following the Portugal superstar's move to Juventus.

Speaking to Cadena SER, Martinez said: "It could be the best time [for Hazard] to try something different.

"Hazard could carry a new project anywhere in the world. He is at the best moment of his career. For me, it's very easy to answer that question.

''He could fit in any team in the world. Players need new challenges and new projects. Perhaps it's a good time for [Chelsea] and for Eden [to split]. I would be very surprised if Chelsea didn't have big offers for him right now."