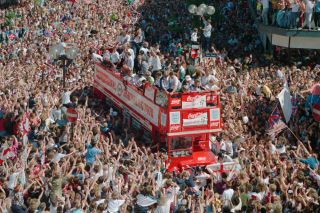 Italia 90 is one of the most fondly remembered tournaments of recent times.

From Gazza’s tears to Roger Milla’s bum-wiggle to Luciano Pavarotti’s soundtrack, it was a World Cup that had everything.

Here, the PA news agency looks back on those few weeks in Italy.

The first tournament of a new decade heralded a new dawn for English football. The 1980s had been blighted by hooliganism in the stands, which had seen English teams banned from European football, while there were also the tragedies that happened at Heysel and Hillsborough. The Three Lions were back on the world stage four years after they were beaten by Maradona’s Hand of God, though with Bobby Robson still in charge, they had scraped through the qualifying groups. But, fired on by New Order’s World In Motion song and a mercurial talent by the name of Paul Gascoigne, England travelled to the continent with renewed confidence.

#OnThisDay in 1990, the #ThreeLions beat Belgium in extra time to reach the quarter-finals of the #WorldCup. pic.twitter.com/iZG1PvoFNT— England (@England) June 26, 2018

England produced their best performance in a World Cup since they won it 24 years earlier as they made it to the semi-final, before it literally ended in tears. It is easy to look back on the run with fondness, but it has to be said that Bobby Robson’s side made it through to the last four without playing well at all. They scored only two goals in the group stage, needed a wonder goal by David Platt in the last minute of extra time to beat Belgium in the last 16 and then barely made it past Cameroon in the quarter-finals, with two Gary Lineker penalties – one in extra-time – avoiding a major upset. Their semi-final defeat to West Germany was their best performance of the tournament as they had the better of a 1-1 draw before they suffered heartache with a penalty shootout defeat.

One of the most enduring images from any #WorldCup – Gazza's tears 😢at Italia 90 🇮🇹 pic.twitter.com/VVmJxDC9s7— FIFA World Cup (@FIFAWorldCup) May 13, 2018

The tournament will be best remembered for the tears of Gazza. The playmaker had lit up Italia 90 with his antics on and off the field as his cheeky personality along with some fine performances shone through. But it did not end in the way he would have wanted. His over-exuberance in the semi-final against West Germany saw him make a lunging tackle, which earned him a yellow card. The realisation that he would be suspended for the final should England get there was immediate and his bottom lip began to tremble, followed by a full outbreak of tears. It was the enduring image of the whole summer and catapulted Gazza into worldwide stardom.

Best of the rest

It was not just England’s run to the last four which made it a memorable tournament, as although often the football was not particularly eye-catching there were plenty of colourful moments. Cameroon captured the imagination of the world, creating one of the biggest shocks in World Cup history by beating defending champions Argentina in the opening game and the 38-year-old Roger Milla was a star, with his famous bum-wiggling celebration. There was an unforgettable few weeks for the Republic of Ireland, who made it to the quarter-finals, earning an audience with the Pope. In less savoury scenes there was clash between West Germany’s Rudi Voller and Holland’s Frank Rijkaard, where the latter spat in Voller’s hair. Scotland were embarrassed with defeat to Costa Rica, little known Italy striker Toto Schillaci won the Golden Boot while West Germany went on to lift the trophy, beating Argentina 1-0.

Italia 90 left a positive impression on English football, shaping a new generation’s love of the game. Gascoigne earned celebrity stardom for his antics, while Chris Waddle and Stuart Pearce, who missed penalties, made TV adverts for Pizza Hut. One of the biggest legacies of the tournament was the love of Italian football. Helped by Gascoigne’s move to Lazio, live games were broadcast on Channel 4 while a number of top players all flocked to Serie A. Unfortunately for England, things took a slide as Robson’s departure coincided with a bleak spell, ultimately ending with failure to qualify for the 1994 World Cup.