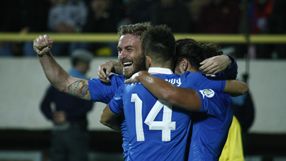 Italy are top of Group B with seven points from their three matches ahead of Bulgaria who have five after drawing 1-1 with Denmark.

"These are hard matches but the team showed personality and desire to play, we risked a bit but that's normal," Italy coach Cesare Prandelli told RAI television.

"The team played from the first minute to the last with the mentality to win the game. If you go out to press the opposition high up the pitch, it can also happen that they break on you."

Prandelli's side started brightly and took the lead in the 11th minute through Andrea Pirlo's penalty after Riccardo Montolivo's cross was handled by Hrayr Mkoyan.

Armenia equalised when Henrikh Mkhitaryan collected a knock-down, following a clash of heads between Christian Maggio and Hrayr Manoyan, and skipped past Andrea Barzagli before driving the ball low across Italy goalkeeper Gianluigi Buffon.

Prandelli and his players protested after the goal, as Maggio remained on the ground, and replays appeared to show referee Marijo Strahonja moving to stop play as Mkhitaryan bore down on goal.

"Two players clash heads like that, you have to stop play," Prandelli said.

Buffon prevented Armenia from taking a second-half lead with a wonder save from a Davit Manoyan volley on 56 minutes and then again two minutes later when Aras Ozbiliz worked space in the area only to fire the ball at the keeper.

De Rossi gave a stuttering Italy the lead after 64 minutes when he charged on to a pinpoint Pirlo cross to head from close-range past Roman Berezovski off the bar.

Vardan Minasyan's team were a constant threat on the break, causing the Italian defence all sorts of problems.

They could have equalised for a second time when Mkhitaryan robbed Leonardo Bonucci on the edge of the area and fired a dangerous cross that De Rossi almost put in for an embarrassing own goal.

After Stephan El Shaarawy somehow failed to score for Italy on 80 minutes when presented with a golden opportunity in the middle of the area by Maggio, Pablo Osvaldo sealed the win a minute later, heading home a De Rossi free-kick.