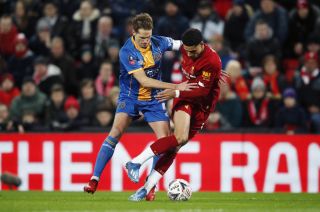 Veteran Shrewsbury midfielder David Edwards has conceded to never feeling as disappointed after a match as following his side’s FA Cup defeat at Liverpool.

The 43-times capped former Wales international, with 534 club appearances behind him for the Shrews, Luton, Wolves and Reading, cut a dejected figure following the 1-0 fourth-round replay loss at Anfield.

A poor performance on the night against the youngest Liverpool side in the club’s history was compounded by VAR cancelling out Shaun Whalley’s header shortly before Ro-Shaun Williams’ 75th-minute own goal sunk the Shrews in front of 8,000 Town fans.

Asked via iFollow Shrewsbury to sum up the feeling in the dressing room, 34-year-old Edwards replied: “Awful. Really bad. Personally, I don’t think I’ve ever felt so disappointed on a football pitch before.

“Just the whole occasion, seeing so many Shrewsbury fans there, who were absolutely incredible, outstanding, from the moment we walked out for the warm-up to the very end when we walked in.

“I’m so proud of them, and so disappointed we didn’t give them anything to shout about.”

After securing the replay on the back of a 2-2 draw at The New Meadow late last month, manager Sam Ricketts’ side failed to register a single shot in the opening 45 minutes.

Edwards added: “In the first half we were really poor. We had tactics to play to, but we didn’t implement them right, we were too passive, we let them build up too much confidence.

“They’re good players, they moved the ball really well with energy and intensity and we couldn’t match that in the first half.”

Edwards thought Town had made the breakthrough on the hour when, from his rebounded shot, Whalley nodded in, only for VAR to turn joy into despair and rule out the strike for offside.

“In the second half we rallied a little bit, started well, and then they had a spell, and then obviously the VAR goal,” assessed Edwards.

“It was from elation to it feeling like it had sucked the life out of you.

“But the over-riding feeling is that we let the travelling fans down.”