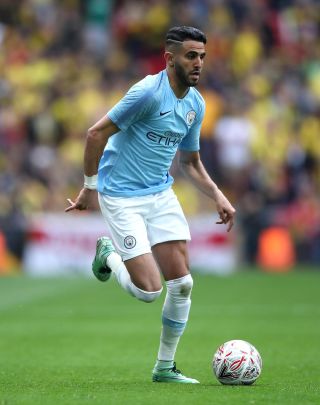 Manchester City’s Riyad Mahrez has been one of the stars of the Africa Cup of Nations ahead of Thursday’s quarter-final showdown in Suez.

Algeria have won all four of their matches without conceding with Mahrez scoring twice and Adam Ounas the competitions’s joint-leading scoring with three.

And Kamara insisted Mahrez will not be the only threat to them.

“Algeria is a great team. They do not play only with Riyad Mahrez. If so, the other players would stay in the locker room,” Kamara told beIN SPORTS. “We will face a team that’s difficult to handle.

“Djamel Belmadi has done an excellent job since he was made coach. I will not go so far as to say that I would have liked to avoid Algeria, because at this stage of the competition we have no choice.

“To be able to go all the way in this tournament, you have to play seven matches. We’ve played four, there are still three to go.

“Algeria is a great team, playing for the final coronation. We have our idea about the Algerian team, that is collectively strong with very good individuals.”

Algeria beat Guinea 3-0 in the last 16 on Sunday but Belmadi has told his team they need to be ready if they concede for the first time in Egypt.

“We are now in a new stage where we will face difficulties, so we have to be aware,” he told a press conference. “The players are determined and they will spare no effort to make the people happy.

“We have to have a good reaction in the case of conceding a goal, a scenario that until now we’ve not experienced during this AFCON. We’d need to recover our poise and change the game in our favour.”