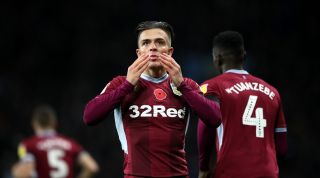 The 23-year-old has enjoyed another superb season in the Championship, scoring six goals and six assists to help his boyhood club seal a play-off place.

Grealish has hinted that he could leave Villa Park if Dean Smith’s side fail to win promotion to the Premier League.

Tottenham attempted to sign him last summer and could launch another bid at the end of the campaign.

However, the north Londoners may have to part with £60m to land their man after Villa inserted a buyout clause in their captain’s contract to avoid losing him on the cheap.

The West Midlanders also offered Grealish a huge pay rise last summer to convince him to stay put for at least another season.

Tottenham lost 1-0 to Bournemouth on Saturday to leave them just four points clear of fifth-placed Arsenal.

Was sacking Darren Moore really a mistake? Why West Brom’s unpopular decision looks to have paid off