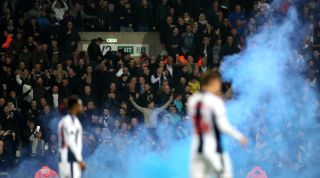 We are hardwired to roll our eyes and throw out our hands in frustration over most managerial sackings. As the financial disparity between success and failure increases exponentially, the flickering light of patience dims. No manager is now more than three defeats from difficult questions. Supporters usually blame trigger-happy owners and chairpersons, but social media proves that there are plenty of fans whose fingers get just as itchy.

But even with those usual caveats applied, Darren Moore’s departure from West Brom caught many off guard. Taking over in April 2018, Moore was named Premier League Manager of the Month after his first weeks in the job. Although he couldn't avoid West Brom’s slide into the Championship, Moore began this season with an extraordinary amount of goodwill.

The Baggies were fourth in the Championship when Moore left, 11 and 12 places above the other two relegated clubs. The news of his sacking provoked mainstream anger that West Brom could treat such a good man in such a bad way.

In fact, some of the only people defending the club’s decision were a section of West Brom season ticket holders. They would always admire, respect and appreciate Moore for his efforts as player, coach and manager, but could also see their club’s form and performances tailing off.

In his final game in charge, a miserable 1-1 draw against lowly Ipswich, the doomed visitors managed 22 shots at The Hawthorns. Ipswich have mustered an average of 9.3 shots in their away games this season.

Moore had not taken West Brom to their lowest ebb, but decline was in danger of setting in. The home form was miserable: seven wins in 18 games, leading to 26 dropped points. They hadn't won in five home matches and, although they were fourth, West Brom were closer to eighth than second in terms of points. With promotion back to the Premier league so vital, decision-makers felt a change was needed.

One of the valid criticisms of West Brom is that they had nobody lined up to replace Moore. The logic of every managerial sacking depends on push and pull factors: a reason to sack someone and a replacement who you can reasonably conclude will be better.

To bring first-team coach James Shan in on a temporary basis, see the club linked to David Wagner, Slavisa Jokanovic, Alex Neil and Garry Monk – then eventually announce that Shan would be staying on until the end of the season – suggests that West Brom are a club making this up as they go along. It’s one thing to sack Moore, but another entirely to do so without a cogent strategy of what comes next. It's this perceived lack of foresight that has most angered supporters.

But one of the reasons that Shan has remained in place is that he is doing an effective job. Defeats to Bristol City and Millwall drew widespread scoffing from those who considered that West Brom made a gross mistake in March, but Shan has won six of his nine matches in charge having taken over a team that had managed five wins in 15. A play-off place has been secured. Only Sheffield United (20) and Aston Villa (25) have taken more points than West Brom (19) since Shan’s appointment.

The home dominance has also returned. West Brom had won three of their last 14 under Moore, but triumped in all five of their remaining home league games under Shan. They had scored more than two goals in only four of the 26 home games Moore managed; it’s four in five under his replacement. Dwight Gayle has rediscovered his goalscoring touch.

Having earned their notoriety in March, West Brom feel like the fifth wheel in the Championship play-offs. But that understatement might just help them.

Leeds United’s fall from the automatic promotion places has dominated the headlines and creates its own pressure. Any column space left has been filled with Aston Villa’s 10-game winning run and their remarkable match against Leeds at Elland Road. Derby County are the favourites to secure sixth place – thus reigniting ‘spygate’ in the semi-finals – but West Brom could ruin that narrative on the final day with a result at Pride Park. The Baggies, meanwhile, have slightly slipped under the radar.

Whoever they face, it's a short jump between courage and foolishness; judgement will soon be made as to which category West Brom sit under. One thing is certain: miss out in the play-offs, and the club will be judged far more severely than if a Moore-managed Baggies had suffered the same fate. When you’re in charge of swinging the axe, it’s a lot easier to make enemies than friends.

INTERVIEW Pontus Jansson: “I had an offer to leave Leeds last summer – but I didn't want people to remember me for negative things”

QUIZ Can you name the 55 Europa League semi-finalists since 2000?