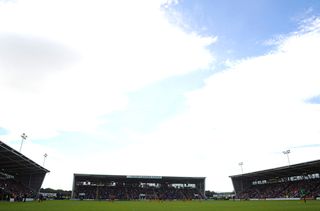 Graham Turner's resignation on Tuesday has left the struggling League One club searching for a new permanent boss.

However, to allow the board time to seek out the ideal candidate, they have asked Jackson, who worked as first-team coach under Turner, to step in on a temporary basis.

A statement on the club's website read: "The Board of Shrewsbury Town FC has invited Michael Jackson to become caretaker manager of the first team for the next three matches whilst the recruitment for a permanent manager to replace Graham Turner.

"John Trewick (senior coach) and Tony Ford (fitness coach) have left the club. We wish to thank them for the sterling work they have put in over the past three and a half years in support of Graham, and wish them success for the future.

"No further statement from the club is expected to be made on this matter until we have resolved the manager position."

Jackson will oversee the fixtures against Swindon Town, Colchester United and Brentford.