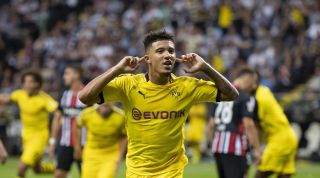 Jamie Carragher has backed Jadon Sancho to shine in the Premier League next season.

The Borrusia Dortmund forward is expected to depart Signal Iduna Park this summer, with Manchester United, Liverpool and Chelsea having all been linked with the England international.

Sancho swapped Manchester City for Dortmund in 2017 and has gone on to thrive in German football.

The 19-year-old has scored 15 goals and provided 15 assists in the Bundesliga and Champions League this season.

And Carragher believes Sancho will replicate that kind of form in the Premier League, should he choose to return to England this summer.

"Sancho is one of the best young players at the moment in world football, especially when you look at his actual stats for Borussia Dortmund," he told Sky Sports.

"He's an English player who I think will be desperate to come back, so I think he'll be the hottest thing everyone in the Premier League will be looking to bring in.

"Will he be a hit? I think so. It's a no-brainer, look at how well he has played in a top league with a top club under pressure. He's playing week in, week out, his numbers are fantastic and his age is just perfect.

"I think he'll have his pick of top clubs in the Premier League, and though the fee may look eye-watering, I think it'll be one of them that over time will look cheap. You're going to get a good player for 10 years there if you keep him at your club.

Sancho's Dortmund side face PSG in the first leg of their last-16 Champions League tie on Tuesday.