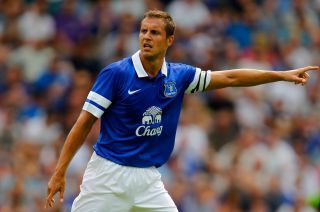 The 31-year-old is one of many to voice concerns around the disruption caused by the window overlapping with the beginning of the Premier League season.

For Roberto Martinez's Everton, it was an especially difficult time as star players Marouane Fellaini, who later completed the switch, and Leighton Baines were sought after by former manager David Moyes at Manchester United.

Jagielka is eager to avoid similar situations occurring in the future.

"It is strange starting the season, playing a few games, and knowing that potentially a few of the players are going to leave," he told the Liverpool Echo.

"I would like it to be moved two weeks earlier so when you start the season, you know they are the players you have got."

The Premier League side did some business of their own in the window, securing the signings of Victor Moses, Gareth Barry and James McCarthy.

And Jagielka is happy with their additions.

"The squad has become stronger in numbers but time will tell," he added. "It looks good and the manager has done well.

"Hopefully the manager can get us playing how he wants to and we can score some goals to get up the league table."

Everton have kicked off their league campaign with three draws on the bounce.