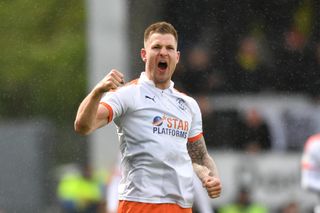 Luton striker James Collins scored an injury-time penalty to earn his side a crucial late point against relegation rivals Stoke at Kenilworth Road.

It had looked like the visitors had done enough for a precious victory on the road, only to concede a spot-kick at the death which was confidently tucked away by Town’s top scorer.

City had gone ahead after nine minutes when Tommy Smith’s cross-shot was turned in by the alert Sam Vokes from close range for his seventh of the season and first since New Year’s Day.

Tom Ince should have doubled the Potters’ lead moments later, escaping the attentions of the home defence only to see his low attempt draw a superb save from home keeper Simon Sluga, who diverted over the bar with his legs.

Hatters took a good 20 minutes to have their first real attack, when right-back Martin Cranie’s deep cross was met by leading marksman Collins, who acrobatically volleyed into the ground and Harry Cornick put his header too close to Jack Butland.

Ince had another effort at full stretch that was easy for Sluga, while the fit-again Izzy Brown curled over the bar after receiving Dan Potts’ pass in what was a desperately poor first half from the hosts.

In the second period, Ince might have done better when beating the offside trap, only to slip when shooting, as Sluga gathered at the second attempt.

Sam Clucas then saw his potshot fly well wide of the target from 22 yards, before Town thought they had a leveller after 70 minutes.

Substitute George Moncur’s shot was parried away by keeper Butland and Cornick converted the loose ball, only to see the linesman’s flag raised for offside.

Nick Powell had an opening for Stoke, who were clearly eager to stick with what they had, blazing wide from the edge of the box when he had time and space to go on.

Town upped the pressure slightly in the closing stages and were awarded a penalty in the 90th minute when substitute Callum McManaman was felled in the area after a good run from Luke Bolton.

Collins stepped up to commendably hold his nerve and send Butland the wrong way to make it 11 for the season and steal a point for the Hatters.

The result sees the Hatters stay bottom of the table, five points behind Stoke who are one place and two points above the drop zone.