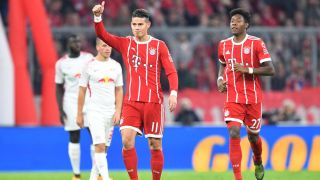 James, on loan from Real Madrid, opened the scoring at Allianz Arena on Saturday for what was just his second goal for Bayern.

The Colombia international has two goals and an assist in five Bundesliga games and Heynckes liked what he saw as his side moved top of the table.

"He had a great game. He had a lot of touches and showed he has a lot of creativity when it comes to playing football," he told a news conference.

"But I'm a coach who always wants more and we'll put in some more work, not only with him, but with the entire team.

on : "He played brilliantly, always working for his teammates. That's exactly what I want from him." October 28, 2017

"You always notice some things that need improving and we haven't always had much time to train well, to set a certain focus, or work on the tactical schemes or on set-pieces because we've been playing on a Wednesday and Saturday rhythm."

Bayern have little time before their next outing – a trip to Celtic in the Champions League on Tuesday.