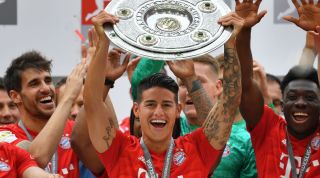 Despite being on loan at Bayern Munich for two years, James doesn't think he belongs there, according to Sky Germany.

Bayern have a €43 million option to buy this summer, but it is reportedly unlikley that they will activate it against the player's will.

James will officially first return to Real Madrid, who are then expected to tell him that he must look for another club.

Juventus are supposedly interested, although no formal offer has been made and rumours are growing around the future of Paulo Dybala.

Jorge Mendes, James's agent, is said to be working with Juventus to try to broker a deal.

It's believed that a final decsion regarding James's future will be decided after the German Cup final.