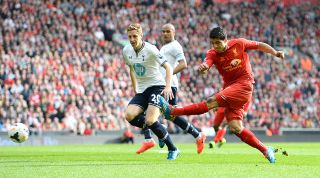 He likened Hazard's position to Suarez's while he was still at Liverpool.

As reported by @DaveOCKOP on Twitter, Carragher revealed how he reacted to Suarez's Arsenal links in 2013, the season before his stunning campaign in which Liverpool went close to the Premier League title.

The Gunners infamously submitted a £40,000,001 bid for the Uruguayan believing he had a release clause, but Liverpool rejected it and Suarez stayed put for another year.

"Me and Stevie [Gerrard] said to Suarez, 'You're too good for Arsenal'," Carragher revealed. "'If you want to leave, you have to go to Barcelon.'"

Suarez was made to train alone in the aftermath by Brendan Rodgers, who bemoaned the "total disrespect of the club that has given him everything".

RANKED! Liverpool’s 10 best European nights at Anfield since the 1990s