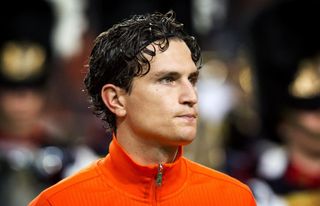 The Feyenoord defender appeared to be the first-choice option after starting all three Group B games as the Dutch claimed top spot ahead of Chile, Australia and Spain.

However, the 24-year-old was not involved in the victory over Mexico in the second round as Van Gaal preferred Paul Verhaegh at full-back.

But Janmaat, who confessed to his surprise at being dropped, hopes to convince Van Gaal to restore him to the starting line-up in Salvador.

"It (being dropped) was a blow that I did not see coming," Janmaat is quoted as saying in AD. "But you cannot dwell on it too long.

"The team comes first; we are here with a purpose - that is to be world champions."

Janmaat made his international debut in September 2012 against Turkey, and has gone on to collect 19 caps.