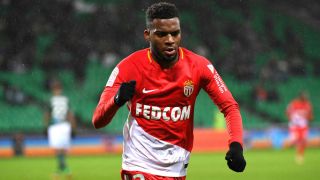 France international Lemar, who was close to joining Arsenal in September, has been linked with Arsene Wenger's men as well as Liverpool, with Philippe Coutinho reportedly nearing a move to Barcelona.

Brazilian star Fabinho – an apparent target for Manchester United and Paris Saint-Germain – has already said the 2017-18 season will be his last at Stade Louis II, however, Jardim said there will be no exits this month.

"Monaco are not in the habit of making big sales in the winter. It's our strategy," Jardim told reporters.

"The players understand and they know how it goes here."

Monaco have already felt the effects of a mass exodus following the departures of Bernardo Silva and Benjamin Mendy before the start of the campaign.

Kylian Mbappe also joined Ligue 1 rivals PSG in an initial loan deal ahead of a permanent transfer believed to be worth €180million.

Monaco are second in the league this season, nine points behind PSG during the mid-season break.