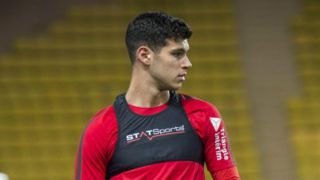 Monaco coach Leonardo Jardim is ready to give teenager Pietro Pellegri his debut for the club due to an injury sustained by captain Radamel Falcao.

A thigh problem is expected to keep Falcao out of action for two to three weeks, robbing Monaco of their talisman and top goalscorer.

Pellegri is yet to make his first appearance for Monaco, although he was an unused substitute in a 3-2 home win against Lyon on Sunday.

Monaco paid a reported €25million to sign the 16-year-old from Genoa, with the Serie A side's president Enrico Preziosi comparing the teenager to Lionel Messi.

And with Falcao ruled out, Jardim suggested Pellegri could be given a debut against Angers.

"[Stevan] Jovetic can play centre forward. [Adama] Diakhaby can play at the forefront, but there are also two youngsters for this position: Pellegri and [Moussa] Sylla," the Monaco coach told reporters.

"Pellegri has only been here for two weeks. I would like to give him more time for his adaptation, so that he integrates our philosophy.

"But with all the absentees, maybe he will play sooner than expected."

Injuries have restricted Jovetic to three Ligue 1 starts this season, but Jardim believes the Montenegro forward has a key role to play.

"Jovetic started the season, he then had a period of injury," Jardim said. "In recent times, he is stronger, he has training and played games.

"He had a good time against Montpellier [a 2-0 Monaco win]. Against Lyon, he made a very good comeback. He has a lot of technical qualities."

The Ligue 1 champions are also without Diego Benaglio and Adama Traore for Saturday's game against Angers, but Thomas Lemar could be involved.