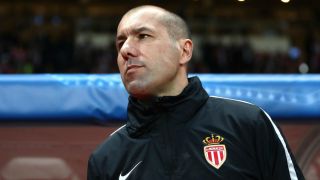 Leonardo Jardim has stressed Monaco cannot afford to lose focus in their bid to officially wrap up the Ligue 1 title.

The Stade Louis II side are on the verge of dethroning Paris Saint-Germain as champions, needing just one point from their remaining two games to end the capital side's dominance, while even two defeats is likely to be enough due to their superior goal difference.

Head coach Jardim is not getting carried away, though, and has urged his men to go for the win when they take on Saint-Etienne on Wednesday.

"We have to play as usual, with the same attitude and ambition," Jardim said at a news conference.

"We will not play for a draw. The objective is to get the team prepared in the best way possible and to stay far away from the euphoric attitude around us.

"We have to keep a cool head. Everything is possible in football, we all remember Barcelona's comeback in the Champions League. Those who have congratulated me have yet to receive a response...I respect the game.

"We have worked for this title for 11 months and this is not the moment to let up. We are only thinking about Wednesday's game."