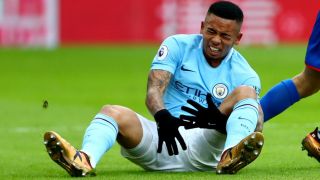 Manchester City striker Gabriel Jesus will be out for up to six weeks with a knee injury, manager Pep Guardiola has said.

The Brazil international damaged his medial collateral ligament in the 0-0 draw with Crystal Palace on December 31 after stretching for the ball.

Jesus left the pitch in distress but confirmed via his official Instagram page that the problem was "not very bad" and that he would not require surgery.

Guardiola thinks the 20-year-old could return in a little over a month, giving him a chance of being available for the first leg of the Champions League last-16 tie with Basel on February 13.

"He will be out for between four to six weeks, or a little bit longer, but hopefully [he will be back] as soon as possible," Guardiola told a news conference after City's 3-1 win over Watford on Tuesday.

City returned to winning ways against Watford in comfortable fashion, with Raheem Sterling, Sergio Aguero and a Christian Kabasele own goal putting them in control before Andre Gray's late consolation.

David Silva made his first appearance since the 4-0 win over Bournemouth on December 23, with the Spain star having been given time off for personal reasons.

Guardiola suggested the 31-year-old could miss further games if he needs to travel back to his homeland, where he has spent much of the Christmas period.

"We are very happy David is back," he said. "We don't know how long [he will be with us], but he made another exhibition. He's essential; he showed how important he is for us.

"He's free to stay or leave, it depends. He wants to stay because he enjoys it, but family is the most important thing in life.

"It doesn't matter if we drop a lot of points – I'd never push him. Some days he will be here, some he will be out. It depends how his family is."