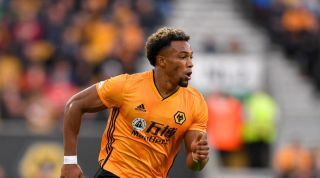 Willems came face-to-face with Traore in Newcastle’s 1-1 draw with Wolves at Molineux on Saturday.

The former Barcelona winger did not get on the scoresheet against the Magpies, but he has been much more consistent with his end product this season.

Traore has scored four goals and provided four assists in the Premier League in 2019/20, and he remains the division’s most prolific dribbler.

And Willems says the Spaniard’s speed makes him a harder opponent to deal with than Ronaldo, who he played against in a 2-1 win for Portugal over the Netherlands at Euro 2012.

“I have played against some very good players in my career, but no one quite as fast as Traore,” Willems told the Northern Echo.

“He is unbelievable, definitely a beast. Not only is he incredibly fast, he is so, so strong as well.

“He’s known as the fastest man in football and now I know that is true. I like to think I am quite fast too – at least I did before playing against him! That was something else.

“I have played against Ronaldo, who is fast, but not that fast. Of course, he is so skilful but sometimes that is easier than being up against someone with such incredible pace.

“I played against Ronaldo in the Euros when Netherlands played Portugal. That was tough, but this was as tough an afternoon as I have had, even though I thought I did quite well.”

Wolves and Traore return to action on Wednesday with an FA Cup third-round replay against Manchester United, before a trip to Southampton on Saturday.

Newcastle, who secured their passage to the fourth round of the FA Cup with victory over Rochdale on Tuesday, face Chelsea this weekend.