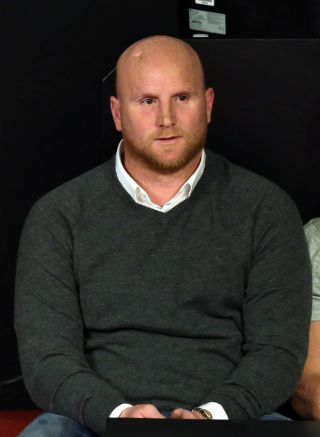 John Hartson called for Rangers to consider conceding the Ladbrokes Premiership title to Celtic if the season is unable to resume.

With eight games remaining, the Hoops are 13 points clear of their Old Firm rivals at the top of the table having played a game more.

Scottish football is currently in shutdown due to the coronavirus crisis until at least April 30 but there is speculation that it could be many more months before the game can restart.

Rangers managing director Stewart Robertson stressed that he wants the season completed, which is the preference of Celtic, albeit chief executive Peter Lawwell insists the campaign cannot be declared null and void and that in the event that the matches cannot be completed, responsibility to find a “fair”  solution lies with the Scottish football governing bodies.

However, noting that the Highland League brought their season to an early end this weekend and awarded the title to leaders Brora Rangers, who were 13 points clear of Inverurie Loco Works FC with six games remaining, Hartson called for Rangers to take the lead in a similar way with the top flight.

The former Celtic striker – speaking on BBC Radio Sportsound – said: “Celtic probably have to lose five out of their last eight league games to be overtaken. Let’s be realistic about it, that isn’t going to happen. Celtic are flying.

“It is looking like we might not get going and I feel that there are too many hurdles to get over to get the league under way.

“If Rangers were to say, ‘OK, you have been worthy champions, you have got a massive lead and if the season were to stop, Celtic would be handed the title’, then they would come away with a lot of credit.

“I can honestly say I would be saying exactly the same if Rangers had the lead Celtic have.

“I know this causes a little bit of controversy. What happens with Hearts (bottom), do they get relegated when (owner) Ann Budge is coming out and saying they would take legal action as they feel they would have an opportunity to get themselves in a safe position if they play the league out?

The club are delighted to announce that after today’s Highland League meeting between all clubs that we have been declared league champions for the season 2019/20. This decision was taken in light of the current global health crisis. pic.twitter.com/jJocQmoI9W— Brora Rangers (@brorarangers) March 21, 2020

“Everyone has to come together here. There are certain cases when you say, ‘you know what, let’s have a bit of common sense’.

“And I feel if Rangers were to do that, as a football club, that would bring football together, I really do.

“With all the negativity going around the world with this coronavirus, I think they would come out of it with huge respect and gratitude from the other clubs.

“It would be a nice gesture. I am not saying Celtic want it to happen. It probably won’t happen and I will probably be shot down for this, but it would be unbelievable if something like that was going to happen.”