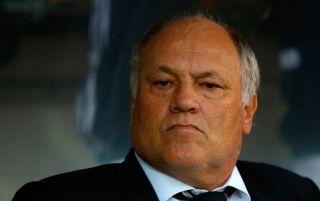 The London club have brought in seven players so far, with the likes of Darren Bent, Scott Parker and Maarten Stekelenburg having all featured prominently in the opening games of the season.

And Jol believes his squad is looking strong for the 2013-14 campaign, expressing delight with the presence of competition in every position.

"It’s not like we’ve spent like Tottenham and other clubs, but I think we’re pretty satisfied to have the players on the board," he said. "I think we did very well to see Scott Parker playing for us – it’s as if he was always there.

"Darren Bent came in, Adel Taarabt scored his first goal (in the League Cup win over Burton Albion in midweek), so I’m pretty satisfied but you always wish to be perfect. I need a number one in any position because that makes it easier.

"Even for the players on the bench, they will know Berbatov is good and he will play. But I saw with Taarabt, for example, he went in and he scored. And Alex (Kacaniklic), for example, who’s a very good talent, has got to learn that: to be productive and score at least eight/nine goals.

"So there is some rivalry for places and the only thing for me is to gel them together in a good side and make us a bit more solid, and I think even that is possible – to score more goals and be solid at the same time."

The Dutchman also explained that he is not expecting Fulham to make a host of further additions before transfer deadline day, although he did admit to coveting another defensive player.

"I don’t think it (deadline day) will be as hectic as it was here over the last season when we had one or two players coming in on the last day," he added. "But there are always wishes for any manager.

"We are probably 20th in the ranking in the league in terms of spending money, but we still do well so we are very proud of that sort of thing, that we still get the good players in – like Bent, and even Scott Parker – and I think if we can do that, attract these players, we will do well."