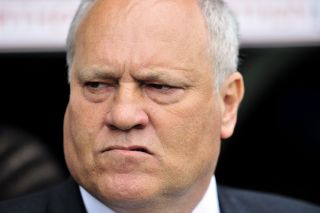 The Dutchman made nine changes for the 4-3 away defeat as Lloyd Dyer's last-gasp goal earned the Championship side a place in the last eight.

Fulham return to Premier League action on Saturday with the visit of Manchester United before facing a trip to Liverpool the following weekend.

They will need to cause an upset if they are to improve on their current standing of 14th in the table, but Jol is not worried by the start his side have made.

"I don't feel pressure because we're not bottom of the league, there are six or seven other teams on similar points and lower," he said.

"There are a few teams on 10 and 11 points so we have to come up with a surprise result (against United or Liverpool) and if not we have to get the points against the other teams we play against."

The 57-year-old was also heartened by the performance of some of his fringe players, who were given an opportunity to shine at the King Power Stadium.

"A few boys showed they could play and I thought the spirit during the game was good - but we gave cheap goals away," he added,

"The disappointing aspect is that without playing perfect we controlled the first half and then there was the craziness of them scoring two goals out of nothing.

"Maarten Stekelenburg couldn't hold the ball and the second goal Philippe Senderos played it to their feet and that was a hammer blow.

"When we scored the third goal I thought to really go for it and score the winner but it wasn't to be - we smelled blood and they scored the winner."