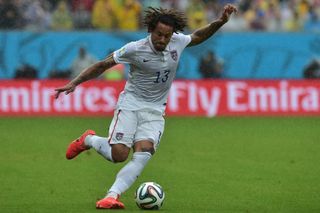 The signing marks the first time the unusual method has been used, with MLS dictating that designated players "of a certain threshold" fall outside the usual allocation regulations that determine which clubs have first refusal on major stars.

With Chicago Fire - reported to be Jones' preferred destination - also in the running to secure the 32-year-old's signature, the league turned to the 'blind draw' to determine his future.

"I'm very excited to come to MLS and join the Revolution," he said. "New England is an exciting team on the rise, and I believe I can come in and help the team make a push toward MLS Cup.

"Playing with the US National Team has given me a great connection with the American fans and I'm looking forward to playing in front of them every weekend.

"I'm ready to get started with the Revs."

Former Schalke midfielder Jones last played with Besiktas in Turkey and made four appearances for his country at the World Cup in Brazil.

The Revolution currently sit five points adrift of an automatic spot in the Eastern Conference semi-finals.