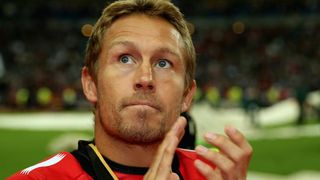 England head coach Eddie Jones revealed he has offered Jonny Wilkinson the opportunity to be part of his coaching team.

The former fly-half is regarded as one of the best rugby union players in the world, and is best known for scoring the winning drop goal in the last minute of extra time against Australia in the 2003 Rugby World Cup Final.

Jones said he asked Wilkinson to get back involved in the national team set-up after a recent meeting between the two.

"We would like to get him involved, but he is quite a private person," Jones said.

"After we had coffee, he went and did a kicking session even though he doesn’t play anymore. Why was he one of the best in the world? Because he did that. That is the difference.

"He is retired, but he still wants to be a good kicker. How many players do that now?

"A good player has that little bit extra, and we are talking about two or three per cent extra. He does that little bit of extra analysis, does his stretches, goes for a swim, and takes a bag of balls and ­practises kicks.

"I want that attitude from my players, I want them to show how desperate they are to be better."

Jones, who took over the England job last November, said he has also been inspired by Bayern Munich coach Pep Guardiola after a recent visit to Munich.

"I was ­embarrassed by my coaching after watching him take the session. He was so bloody brilliant. He has got some of the best players in the world – Franck Ribery, Arjen Robben and Thomas Muller – and he just worked them so hard," he said.

"It was minus three degrees yet they came off the field dripping with sweat – that’s how hard they had worked. And they play about 45 games a year – it really demonstrated how much there is in those players.

"Rugby is a different game because you have got contact, but the ability to work hard and improve is there.

"I had about an hour and a half with him, talking about his philosophy, about how you move the football into space because, in rugby, once you get away from the set-piece, it’s like ­football.

"You want to have a ­formation so players know where to go and how to move in ­relation to where the ball is and what the defence does.

"So, if the ball is fast, we are at the line and pressing; if it is slow, we have a slightly different ­formation."