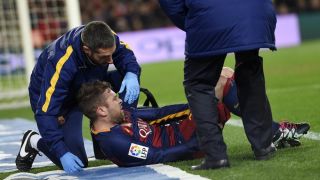 Jordi Alba will miss at least the first leg of Barcelona's Copa del Rey quarter-final with Athletic Bilbao after sustaining a hamstring injury.

The Spain international pulled up in discomfort after sliding to prevent the ball from going out of play during Barca's 6-0 La Liga thrashing of Athletic on Sunday.

The European champions confirmed after the match that Alba has suffered a strain to his right hamstring and will be sidelined for 10 days.

The 26-year-old full-back will miss Wednesday's first leg at San Mames and the away game with Malaga on January 23, while he will face a race to be fit for the return match with Athletic at Camp Nou on the 27th.

Lionel Messi was substituted at half-time of Sunday's game after picking up a similar muscle problem and will undergo scans on Monday.