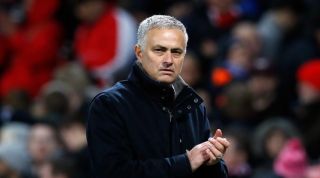 Tottenham have reached out to Jose Mourinho as they prepare for the possibility of Mauricio Pochettino leaving the club, according to a French report.

His side were also knocked out of the EFL Cup by Colchester and suffered a humbling 7-2 defeat by Bayern Munich in the Champions League.

Pochettino is thought to retain the faith of chairman Daniel Levy, with whom he continues to enjoy a positive relationship.

The Argentine is therefore unlikely to be sacked unless results deteriorate further, but the powers at Tottenham remain fearful of the former Southampton boss departing at the end of the campaign.

Pochettino has been linked with Real Madrid and Manchester United in the past, with the latter still huge admirers of his work.

United have made an even worse start to the 2019/20 season, with Ole Gunnar Solskjaer - who succeeded Mourinho last December, before being handed the job full-time in March - likely to face further criticism if his team lose to Liverpool on Sunday.

And according to Soccerlink, it is Mourinho who Tottenham are targeting should Pochettino vacate his post.

The Portuguese has been out of work since leaving Old Trafford and reportedly turned down the chance to manage Lyon last week.

Jean-Michel Aulas, the Ligue 1 club's president, claimed that Mourinho rejected his advances because he has a job lined up elsewhere.

Spurs have made contact with the representatives of the former Chelsea, Inter and Real Madrid head coach, who won three Premier League titles across two spells at Stamford Bridge.

However, it is not yet clear whether Mourinho would be interested in the position, while Tottenham will hope that Pochettino turns things around in the coming weeks.