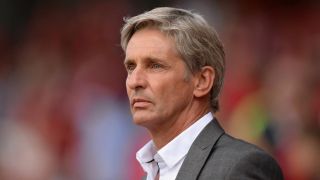 The caretaker coach was removed on Wednesday after only two-and-a-half months in charge, with the London club sitting 23rd in the table following only two wins from his 13 league games in charge.

Charlton have acted quickly to replace him in handing Riga, who saved the club from relegation in 2014, an 18-month contract on Thursday.

Since his initial exit, 58-year-old Riga went on to spend brief spells with Blackpool, Standard Liege and Metz.

He faces a tough task to ensure survival at a club where fans have made multiple protests against the club's owner, Roland Duchatelet.

Speaking to the club's official website about Riga's appointment, Duchatelet said: "This has been a disappointing season for everyone connected with Charlton and the board take responsibility for that.

"Some things, like an unprecedented number of injuries, we could not have foreseen but we have also made errors in recruitment, mistakes we have immediately tried to address in January.

"It was also crucial we dealt with the position of the Head Coach. Jose did an excellent job in his short period with Charlton two seasons ago. He was very popular with supporters and I believe that he will get us back on track. There are 20 matches of the season still to play and it is vital that we battle for every point."