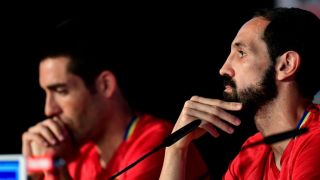 Spain defender Juanfran is looking to use the philosophy of his club side Atletico Madrid in the knockout stages of Euro 2016.

Having been beaten by Croatia in their final group game, the reigning champions have been paired with Italy in a tough last-16 clash.

And should Vicente del Bosque's men negotiate their way through that fixture, Germany and France or England are potential opponents before even reaching the final of the tournament.

However, Juanfran insists the focus is solely on the Italians for now – a pragmatic approach that has served Atletico well in the past few seasons.

"Whether our game is the most difficult, we will see," he said.

"We can apply the philosophy of Atletico, take it game by game."

The 31-year-old is also adamant that Spain have plenty to be positive about after finishing second in Group D.

"In the majority of the three games, we have been the better team," he added. "I believe that too much has been made about the defeat.

"We are convinced that we are going to qualify for the next round. Any opponent that we get in the last 16 will be tough to play."