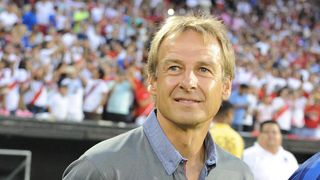 CARSON, Calif. — If you have listened to recent comments about Jurgen Klinsmann, you would think he is Major League Soccer’s biggest enemy.

In recent weeks we have had an MLS owner (Portland’s Merritt Paulson) hammer the U.S. national team coach for being anti-MLS, and this week we had an MLS star (Benny Feilhaber) criticize Klinsmann for ignoring some of the league’s top players when it came time to select national team rosters.

When you add in the perception that Klinsmann tried steering up-and-coming U.S. international forward Jordan Morris away from MLS toward Europe, you start to see how Klinsmann might be looking like public enemy No. 1 for the North American league.

The German-born Klinsmann is aware of the perception, and he can only scratch his head at what he considers to be a completely false notion that he is working against MLS.

“There's a misconception, and that's just not right,” Klinsmann told Goal USA. “Our consistent message is that we try to get the players to their personal highest level. That phrase is a broken record. If you ask me, 'Should Michael [Bradley] play for Manchester United,' I'll say yes, and I don't think anybody here would argue.

“I want them to know to chase your highest possible level,” he added. “This is always a consistent message. If your highest consistent level is MLS, I'm thrilled. I'm going to be there for you 24/7 to help you. Jordan is maybe a good example. I said, 'No matter what you decide, we are here to help you with every step. Obviously, you have to be the driver, you are your own boss, but every decision is fine.'"

Klinsmann went on to say "it's sad" that people think he's against MLS and pointed to his team selection for the 2014 World Cup as an example of how much he trusts the talent the league has to offer.

"Why did I take 13 players from MLS to Brazil?” Klinsmann asked. “Why did I come in almost four years ago saying everyone is on the same page, no matter if you're playing in Europe or Mexico or MLS? All of the players suddenly got the same messages, no matter where you're from. I brought players back in that haven't been in for a long time, and we continue to give that message.”

Klinsmann has drawn scrutiny in MLS circles for what was believed to be his attempt to steer Morris to Europe after Klinsmann and U.S. Under-23 coach Andi Herzog helped set up a trial with Bundesliga side Werder Bremen. Klinsmann insisted his efforts with Morris were about ensuring the former Stanford University star was able to see all his options.

“It hurts when people say I want every kid to go to Europe, because every kid is so different,” Klinsmann said. “If Jordan makes the decision to go to Bremen and he doesn’t feel ready for it, he will fall under the table three months from now. Whose benefit is that? Nobody’s. The kid is burned and maybe doesn't even find his way back up anymore.

“It's wrong that people think I push a player either way,” he continued. “That's when people don't really see our work and how we work. We haven't yet done a good enough job to explain all the time what the national team is about and what our work is and how we deal with players on all sorts of ends, meaning players from Mexico, the U.S., Europe or whatever.”

With Morris officially introduced by the Seattle Sounders, Klinsmann made it clear he has no problem with the 21-year-old choosing to stay home rather than start his pro career abroad.

“For every player, the step comes at a different time and (Morris) has to feel it is right,” Klinsmann said. “I felt I was mature enough to go to Italy at 23, 24, not before. I had offers, big offers, when I was 20, 21. Arsene Wenger at Monaco offered, at that time, 6.5 million to Stuttgart and I said I want to go. Monaco sounds like fun, Monte Carlo and stuff like that.

“My president came at Stuttgart and said, 'You're not going anywhere. You are not mature enough yet.' I looked at him like, 'Me? I'm not mature enough?' The same (with Morris). You have to take the tempo of that person.

“I just want to do what's best for the kid. So if the kid says, 'I badly want to go there,' and the club is OK with that, that's all cool with me as long as the player is 100 percent behind it."

As for criticisms aimed at him by the likes of Merritt Paulson, Klinsmann acknowledged having spoken to the Portland Timbers owner after Paulson was recently quoted in a podcast ripping Klinsmann for being anti-MLS.

"I don't think you're going to find a single MLS owner who's going to be an advocate for Jurgen Klinsmann,” Paulson told Soccer Madein Portland. “This is a guy who has got a clear agenda that's an anti-MLS agenda. He makes emotional decisions. Landon Donovan would be a case in point. There's very much an agenda to get people playing abroad and probably rewarding some people playing abroad who don't deserve to be playing.”

Klinsmann revealed that he spoke with Paulson after those comments to clear the air and try to explain to him what he is trying to do as U.S. coach. Klinsmann called the conversation a productive one that left Paulson feeling differently about his position on Klinsmann. Paulson confirmed to Goal USA that the two did have a good chat and that he appreciated Klinsmann’s willingness to engage.

“We talked at length. It was really a good talk,” Klinsmann said. “I said, ‘Merritt, because you do not know, you were, unfortunately, given the wrong information. You were fed the wrong input by the wrong people. Here are the facts and here's what we're doing.' He said, 'You caught me on the wrong foot.' It was good. If I had that chance with every owner of the league, I think they would think probably differently.”

Klinsmann’s relationship with MLS will continue to be a complicated one because of his natural desire to want the best American players to strive for the best and work toward trying to play in the world’s best leagues. It is a stance that every national team coach in the world has for his players, but one Klinsmann must carefully balance along with wanting to also help MLS grow.

Klinsmann fully acknowledges the unique complexity of his situation as U.S. coach, but he maintains the position that rather than being an enemy of MLS, he is one of the league’s leading advocates.

“We are the biggest fans of MLS because of the growth of the game here,” Klinsmann said. “I'm probably the biggest sales rep of MLS in Europe because I'm talking nonstop to coaches, to people, to fans, to journalists. With endless interviews that I do now, the comments that I make are for the development of MLS in Europe.

"I want this league where I live to grow on a tremendous speed with beautiful facilities now all over the place and tremendous owners.”