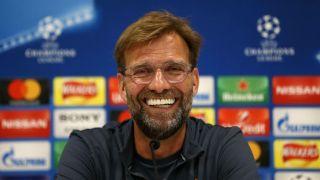 Ahead of Saturday's Champions League final, Liverpool coach Jurgen Klopp has candidly called for "big balls" football from his players.

It may be a much cruder description of style than Borussia Dortmund's "heavy metal" football under the 50-year-old German, but it's nevertheless apt.

The Reds' path to Kiev has not been borne of controlling games, but capitalising on isolated moments, with 29 of the team's tournament-high 40 goals coming from the front three of Sadio Mane, Mohamed Salah and Roberto Firmino.

"It was not that we were so much better, but it was different, so brave," Klopp said. "The power we had against Manchester City for example, it was big balls football.

"There are so many things you have to bring to the pitch to win a game at that level…You have a challenge here, pass the ball here, and then three passes later we score a goal – but it was a challenge that started it.

"These game-changing moments, we had them 500 times and we need them again. Not waiting for something, not hoping for something. Change the game when you can, that's it."

Bravery in game-changing moments will be key, but in a Real Madrid team that have triumphed in three of the past four Champions League finals, Liverpool are facing a side highly experienced in this environment.

It's a psychological aspect Klopp is well aware of in the lead-up, but something he believes his club's historic pedigree can counteract.

"I have never taken a team to consecutive Champions League finals, so I do not know how that will feel for Real Madrid's players," he said.

"We have had two weeks to prepare for this game. You watch Madrid and you think wow, but they have not played us.