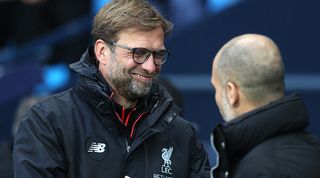 Klopp’s touchline persona is famously animated; one notorious gurn at a fourth official as Borussia Dortmund manager in 2013 got him sent off, and his passionate goal celebrations are widely replayed on highlight reels.

The German has suggested that his behaviour gives onlookers a more reductive view of his managerial abilities – but conceded that he is a terrifying sight in full flow.

Speaking in the November 2019 issue of FourFourTwo, out Friday as part of a wide-ranging cover interview with comedian John Bishop, Klopp said: “I’ve never thought about how I might behave on the sideline. It just happened. It’s just me.

“I’m not interested in what people say about me, but I know that people think I’m not a tactician because I’m too lively to be a tactician. I’m the emotion guy.

“Pep [Guardiola] is lively as well, but not that lively. He looks better when he’s shouting. Pep always looks perfect – body, clothes, everything is perfect.

“When I shout, I look like a serial killer. It’s my face – I bite my teeth in a certain way. I look at babies with exactly the same face. Like, ‘You’re so cute.’ And very often the babies start howling.”

“I’m already much calmer than I was,” Klopp continued, in this extract from A Game Of Two Halves: Famous Football Fans Meet Their Heroes. “I know it’s difficult to believe, but really, I’m already completely different.

“The thing is, I talk to the players all week long. We prepare things. We give advice. We give out information. In a game, it’s difficult to give out many instructions because it’s too loud and play is too fast.

“I’ve said to players a couple of times, ‘I will give you all my power, I don’t need it. So really go for it. I will kick your ass when you need it. I will shout at you when you start to feel weak.’

“It’s better for them to be aggressive and angry with me than to not respond to a situation and end up thinking, ‘Oh, I missed the chance’. It’s better that they think, ‘Boss, you’re a w***er’ and then go off and prove what they can do.”

INTERVIEW Rhian Brewster: I spoke to Jurgen Klopp about going out on loan – he just said "no"

Read the full interview with Jurgen Klopp in the November 2019 issue of FourFourTwo magazine, out in shops and available digitally from Friday (September 27). We also head to Buenos Aires for another madcap Boca-River Superclasico, shine a light on the murky world of money laundering, catch up with forgotten man Adel Taarabt, go inside Wolverhampton Wanderers and much, much more. It’s a belter.