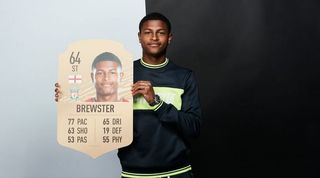 Last week FFT attended the world premiere of FIFA 20, where we managed to grab a chat with Liverpool youngster Rhian Brewster.

The 19-year-old is expected to make his long-awaited Liverpool debut this week against MK Dons in the Carabao Cup, having missed a huge chunk of 2018 with a ligament injury.

Brewster was an U17 World Cup winner with England in 2017 but now has his sights set much higher at Anfield...

You started your career at Chelsea and moved to Liverpool. What was the biggest difference between the two clubs?

The culture. They’re together a lot and the people are tight. The whole of Liverpool are like a big, big family.

What made you move from London to Liverpool?

I wanted a first-team opportunity. I didn’t see myself having a pathway at Chelsea at the time, and I felt the best thing for me was to move away. The best option for me was Liverpool. I stay in touch with the Chelsea boys, though. A few of them are here [tonight] and yes, I do keep in touch.

I’m really happy for Tammy Abraham right now. He deserves it man, everything he gets.

Did you feel the mood change in the Liverpool camp after the Champions League win in June?

Do you think you’ve earned your opportunity to play on the big stage?

I hope so. Obviously I’m not the judge of that, it’s not me – it's the manager. You know, it’s up to him if he plays me.

With opportunities limited so far this season, have you discussed with Jurgen Klopp about going out on loan to get experience?

Yeah, I spoke to him at the beginning of the season and he just said “no”. He doesn’t want me to go on loan, he wants me to stay. So that’s fair enough and it’s good to hear.

You have the likes of Mo Salah, Roberto Firmino, Sadio Mané and Origi to compete with at Liverpool, plus proven first-team players such as Eddie Nketiah, Reiss Nelson and Dwight McNeil to contend with at youth international level. How do you feel about the competition for starting spots?

Competition is good, it only makes you stronger. You don’t want to be the one who’s sitting on the bench or not playing. So of course, it makes you motivated – and it only improves you playing with these guys. With those who aren’t as good, maybe the standard might drop a bit, but playing with great players like I am helps.

What’s Sadio Mané like as a person? Can you keep up with him in a race?

He’s a funny guy, man. He’s like a big kid but he’s a great character to have in the team. He always works hard no matter what. Even if he’s having a bad day or whatever, he’s always training hard.

Could I beat him in a running race? We’ve never really opened it up like that but I’d like to say yeah...

Do you spend a lot of time together?

Not really. It’s normally because we train late. So it’s training, go home, sleep, get up, go back to training. So it’s quite hard - a lot of people have families.

It’s a big season for the national team with Euro 2020 coming up next summer, and young players like Jadon Sancho, Declan Rice and Callum Hudson-Odoi have got in of late. What are your prospects of making the senior set-up over the next few seasons?

You’ve got to play at club level first and then who knows? Dreams do come true. I’m only at the beginning of my career, but I can’t wait to maybe score in a final and lift a cup.

Liverpool didn’t make any major outfield signings this summer. Does that suggest the manager has faith in you and other young players to step up?

Of course! You know he's seen that he doesn’t need to make any signings so he wants to trust the players that he’s got. That’s great to hear.

You’ve suffered a long-term ankle injury. Is playing FIFA one of the ways you get through a lay-off like that?

A few of the squad play Ultimate Team. Trent loves opening packs. I dunno why...

You said it was “mission failed” on your FIFA card this year. What stat do you think needs upgrading most?

My shooting and my pace a little bit! I need to be 80 pace and my shooting needs to be put up.

The rapper Dave referenced you in a lyric on the recently released soundtrack to Top Boy. How did that come about, and did you appreciate the shoutout?

And lastly, what’s the maddest thing you’ve ever seen Jurgen Klopp do?

Rhian Brewster was speaking at the FIFA 20 World Premiere. EA SPORTS FIFA 20, featuring VOLTA FOOTBALL, is out on September 27 for Playstation 4, Xbox One and PC. To pre-order your copy, head here.

Jurgen Klopp exclusive: Steven Gerrard should replace me as Liverpool manager one day

Adel Taarabt exclusive: Luka Modric told me I'd play for Real Madrid or Barcelona one day

Quiz! Can you name every team Lionel Messi has scored against in the last 12 months?