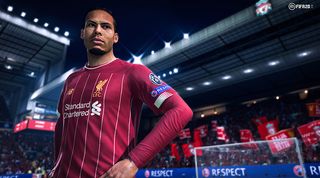 With PS5 and XBox Project Scarlett looming, early expectations for FIFA 20 were a football sim that stuck to the bare necessities. An update to Ultimate Team here, a couple of new leagues there, and – inevitably – all the usual real faces, teams and kits. Mercifully, developer EA Canada has gone a bit further than that, reintroducing one of its most beloved features of yesteryear. Welcome home, street football.

First seen in FIFA 97 and later turned into short-lived series FIFA Street, small-sided matchplay is finally reinstalled as a mode called Volta. You can play 3v3, 4v4 or 5v5 in a total of eight arenas, with or without walls. And – especially for your goalie mate who not-so-secretly fancies himself as a centre-forward – you can specify whether or not to utilise rush keepers.

Like in the main game, you can use any team in world football – and it’s wonderfully fun. Action is intense, skill moves are bonkers, and celebrations are hilariously OTT. Just when you thought you’d seen it all in FIFA, you get Juan Mata joyously throwing himself backside-first into a cage wall after scoring.

Even better, the claustrophobic settings ensure pace isn’t overpowered. Instead, matches are all about quick thinking and even quicker stick-flicks. Online and off, it’s a welcome injection of freshness.

Alternatively, for three days' early access and plenty more goodies, get FIFA 20 Champions Edition for PS4 or Xbox One (both £79.99).

The 11-a-side game doesn’t pack the same sense of novelty, but that’s not to say it’s been left untouched. Passing and dribbling feel much as they did in FIFA 19, but shooting has a touch more ‘pop’ and is significantly improved by players’ abilities to hit the target from tight angles. Off-the-ball runs into space are more aggressive too – mostly a good thing, but get used to seeing at least five offside flags per match.

Human vs Human matches feel tidily balanced, though that may change as better players discover ways to manipulate the engine. Such is the way of modern FIFA: expect an early patch to combat any glitches. Matches against the AI are improved by it occasionally misplacing passes and miscontrolling balls to feet, but there are still occasions where it suddenly seems super-powered and leaves you cursing at last-gasp equalisers.

For many, the biggest question is how card-collecting, team-building juggernaut Ultimate Team handles. The news is mostly positive.

Its debuting ‘seasons’ structure, where rewards are unlocked as you clock up game time without having to make too much effort, is a smart way to both integrate newcomers and draw doubters back in. Novice or pro, who wouldn’t want Virgil van Dijk skippering their side for five matches to get the new season underway?

Squad Battles, where you play AI teams throughout the week in order to unlock rewards every Monday, also get an upgrade. Previously, if you missed a day’s fixtures they were lost forever, limiting your leaderboard rank; now matches stay in the system for the entire week, and can be refreshed at any time.

Two ‘featured’ fixtures can also be replayed as often as you want, with a devilish risk-reward mechanic: only the most recent result counts. Do you take the 2-0 win and 1,700 ranking points on professional, or try again on a higher difficulty knowing a loss will wipe those points away? Cleverly done.

FUT’s competitive online options have barely changed – Division Rivals, FUT Champions, and online draft are the standard-bearers here. I grew to love the first two after an indifferent start to FIFA 19, but if you’re one of the many who didn’t, FIFA 20 is unlikely to win you round.

However, the light-hearted Friendlies mode should prove more intriguing. It enables you to play mates (or CPU teams) in either standard matches or under wacky, arcade-style rules, without the end result affecting your squad’s contracts. I rolled my eyes when this was announced – it seemed a desperation dart-throw on EA’s part. Boy, was I wrong.

Two particular Friendlies are especially riotous. ‘Swaps’ moves three players from each team to their opponent’s squad before each match – and if those players score, the goals count double. Even better, ‘Mystery Ball’ changes the ball’s properties each time it goes out of play, granting shooting or speed boosts to the player in possession. Played on the sofa against a mate or little sibling it’ll have you in stitches, then swears, then stitches again.

Curiously, that’s when this year’s FIFA is at its best – when it’s making you laugh with the absurdity of Volta goals or overpowered Mitre Deltas. Which is a curious thing to say about an otherwise-serious football sim, and precisely the reason it merits four stars as opposed to five. For the most part, FIFA 20’s staples are a case of ‘as you were’.

Prepare for another 12 months of insisting you’ll never play it again at 11.59pm on Saturday night – only to log in for more come 11.59am on Sunday morning.

Derek Rae and Lee Dixon were added to FIFA 19 to provide Champions League commentary, and are now available across all modes. Rae’s enthusiasm and believability make them an immediate upgrade on Tyler and Keown.

Yes, we’ve come to expect this, but it still shouldn’t be taken for granted. The Bundesliga gets a league-wide scan this year – 13 stadiums, 180 faces – and in terms of teams, the Romanian league is here for the first time.

Assigning your own goal celebrations and tifo displays in Ultimate Team is a largely superficial touch, but still brings a neat extra element of personalisation. More subtle flourishes like this in FIFA 21 would be brilliant.

It’s easy to forget just how great the bespoke Champions League mode added last year is, especially with the option to edit qualifying teams to your liking. Fancy lifting the jug-eared cup with Sheffield United? This is your chance.

and one we hate…

Incremental changes like editing your manager’s appearance aren’t enough to truly refresh career mode – those hoping for sweeping improvements there will have to wait until next-gen.

FIFA 20 is released on 27 September on PS4 (version reviewed), Xbox One, PC and Nintendo Switch