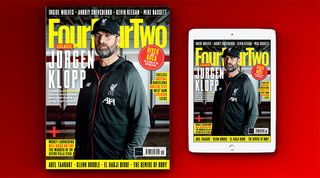 It’s six-and-a-half years since we first put Jurgen Klopp on the front cover of FourFourTwo. Back then, he'd just won two Bundesliga titles with Borussia Dortmund, but he was relatively unproven in European competition. His 12-year managerial career had produced just three wins in European knockout ties – against Mika Ashtarak and Keflavik during his time in charge of Mainz, then a solitary Europa League qualifying victory over Qarabag in his first five years at Dortmund.

But it was only a matter of time before he achieved continental success. Klopp’s domestic feats, and his sheer force of personality, had already marked him out as the next elite global manager.

Within months, the German had guided BVB to the 2013 Champions League Final at Wembley, where they narrowly lost to Bayern Munich. It was the first of four European finals in six years – three defeats, then Champions League glory with Liverpool in June. No one could say that he didn’t deserve it.

Klopp’s jovial side is well known – but this month, we explore his serious side in an exclusive extract from new book A Game of Two Halves. The interview was conducted by comedian John Bishop – it’s genuinely fascinating, and provides new insights into one of the most famous men in football.

There are more great interviews in this issue, too: Glenn Hoddle sits down for an in-depth chat, Tony Cottee brings more brilliant tales of Gazza, we talk to the much-misunderstood Adel Taarabt, and Neil Danns explains what it was like to be Bury captain when they were expelled from the Football League.

We also tell the inside story of Wolves’ rise from League One to the Europa League group stage, and watch River Plate and Boca Juniors meet for the first time since that infamous Copa Libertadores final last year. Warning: it may include strange folk in bear masks and a pig’s head taped to a coffin…

Liverpool were 10th in the Premier League when Jurgen Klopp arrived – now they’re European champions. He chats to John Bishop about his Reds rebuild, being ‘normal’ and scaring babies...

Nine months after the chaotic Copa Libertadores final that eventually had to be moved to Madrid, FFT headed to Buenos Aires to see the Superclasico rivals meet again, and found that from bear masks to coffins, River supporters were making the most of their historic Bernabeu triumph.

Throughout both the professional and amateur game, concealing the origins of illegally obtained money is believed to be rife. FFT shines a light on this murky world of organised crime, uncovering the tricks that teams employ to get around the law. Could your club be doing it too?

The killing of Tommy Ball

The tragic tale of Aston Villa's rising star: the only Football League player to be murdered.

Boasting international stars, an elite boss and improved facilities, Wolves and Molineux have been revolutionised since their days in lowly League One just five years ago. FFT learns how the Europa League newcomers have succeeded where plenty other well-backed teams have failed.

On his day, his skills lit up English football, but the ex-Spurs and QPR marvel’s career stalled and he went nearly four years before making his league debut for Benfica. Now, he tells his side of the story...

Luxury player, or midfield genius? An aloof, unpopular manager, or a pioneering coach ahead of his time? Glenn Hoddle has split opinion since his emergence as a two-footed teenage talent, right to the present day – via triumph, scandal and a near-death experience. FFT unravels the enigma.

Between The Lines: Danns on Bury

Neil Danns captained the Shakers to promotion from League Two before making history with Guyana at this summer’s Gold Cup. Then his world came crashing down around him.

Pathetic and prophetic in equal measure, Mike Bassett: England Manager is football's answer to This Is Spinal Tap

The former West Ham and Everton marksman reveals which team-mate tried to open a plane door mid-flight, why he won only seven England caps, and what went wrong in his stint as Barnet boss.

Why not treat yourself and get 5 issues of the world's greatest football magazine for just £5 – the game's greatest stories and finest journalism direct to your door for less than a pint in London. Cheers!