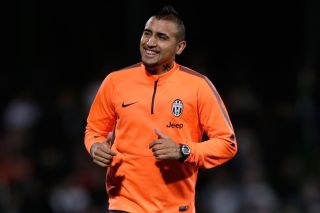 The Chile international has been the subject of much media speculation during the transfer window after a string of impressive performances for the Serie A champions last season.

Manchester United have been heavily linked with a move for the 27-year-old, who recovered from minor knee surgery to feature for his country at the recent World Cup in Brazil.

Marotta reiterated on Wednesday that the midfielder remained a Juve player and had never been put on the market.

"Vidal is fine, he has started training again and his knee is working as normal again," he told Sky Sport Italia.

"He is still available for the team, there is always the same speculation about him. He was never put up for sale and there have never been any negotiations for him.

"They are the usual media rumours that are apart from reality."

Marotta also revealed that the club are in talks with Gianluigi Buffon and Paul Pogba - the latter also having been linked with a move away from Turin - about agreeing new terms to their existing contracts.

"Buffon? We are very grateful to him," Marotta said.

"There is already a contract outlined in principle, we will meet when he wants to. He will stay as long as he wants to.

"Pogba? We have had some negotiation with his agents, we hope to arrive at a positive conclusion shortly."