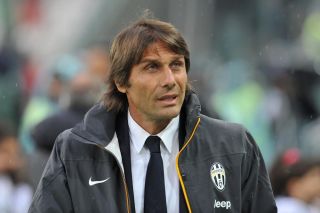 In pouring rain at the Stadio Citta del Tricolore on Monday, Conte watched on as his side fell behind to Simone Zaza's ninth-minute opener.

Carlos Tevez levelled the match 10 minutes prior to the interval, before second-half goals from Claudio Marchisio and Fernando Llorente sealed the victory.

The result leaves Juve eight points clear of Roma with three matches remaining, and Juve will clinch the title with a win at home to Atalanta next Monday, or if Roma fail to win at Catania on Sunday.

Conte, who slid on his knees in celebration when Llorente scored 14 minutes from the end, feels his side have not been given enough credit for their achievements this season.

"I say we are eight points ahead of Roma and playing in the Europa League semi-final. If Roma are stratospheric then I cannot find an adjective to describe Juventus.

"Anything Juventus do becomes almost expected. If we win the Europa League, it'll be considered a worthless trophy. If we lose, then people will say Juve aren't ready for Europe.

"When we achieve something, people act as if it's normal.

"I think those behind us are irritable, not us. They should be careful with what they say, as Roma and Garcia took a step backwards by feeding into the culture of suspicion with talk of 'help' and opponents not giving their all.

"If this is football culture, then it's a step backwards."

When quizzed about his exuberant celebration in the second half, Conte explained it was an action born out of passion.

"What was going through my mind was that we were making a very important step towards a historic Scudetto, as it'd be the third in a row," he said.

"I always had a certain attitude, right from when I was at Arezzo. I was always passionate and enthusiastic as a player and continue that way as a coach.

"I live my profession with great enthusiasm and participation, which I think the players appreciate, as I am there fighting with them on the field, in good times and bad."